The tomb of Seshemnefer, who served as a director of the palace, was partly hewn in the eastern bank of the Dry Moat and partly built of limestone blocks. The chapel has an unusual plan, with the entrance located in the West, and not – as traditionally – in the East; thus, the false door that should face east to enable the deceased’s soul to return from the land of the dead (which was believed to lie in the West) is situated next to instead of opposite the entrance (the tombs of Merefnebef and Nyankhnefertem have a similar layout). 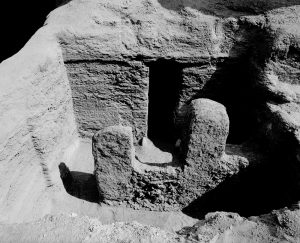 The facade of the Seshemnefer’s tomb was adorned with a portico with two rock-cut pillars.