The funerary complex of Netjerykhet was surrounded with a panelled wall with fourteen gates and a single entrance situated at the southern end of its eastern side. Lower parts of three bastions have been uncovered at the eastern limit of the excavation site. As the wall is partly destroyed, its structure is clearly visible: a rough core of local rock and casing made of blocks of fine limestone, fitted together with an incredible precision, as well as a section of an artificial platform supporting the wall. 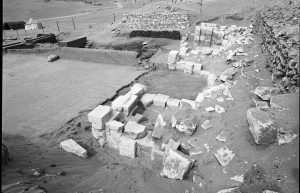 Lower courses of the limestone casing of the panelled wall preserved at the eastern limit of the site. Inner massif built of small, irregular blocks is visible to the left of the limestone wall. 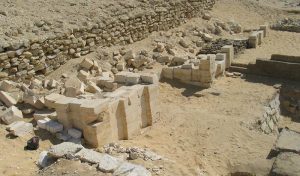 Three ‘bastions’ of the Step Pyramid enclosure wall, its core (left) and the section of the platform supporting the structure (right).