The most impressive monument of Saqqara is the Step Pyramid, the final resting place for Hor Netjerykhet (known to the later generations as Djoser) built by an architect and polymath Imhotep. The world’s first pyramid is surrounded with an array of structures enclosed by a towering, 10 m high limestone wall and encircled by the Dry Moat – a vast rock-cut trench. It is here, on the western side of the complex and between the enclosure wall and the Dry Moat, where the excavation site is situated. In the morning, we start our  work in a comfortable shadow cast by the Step Pyramid, which shifts away by the noon time, but the pyramid is always present, as it has been since almost five millennia.

Unsurprisingly, evidence of 3rd Dynasty activity on the site is omnipresent: from the remains of the Netjerykhet’s enclosure wall – which marks the eastern limit of our excavations,  through the traces of a quarry that yielded stone for the complex, and the Dry Moat, as well as numerous  small objects – such as fragments of ‘boundary stelae’ or blue faience tiles that decorated chambers under the pyramid.

Left: One of the walls in underground chambers of the Step Pyramid decorated with blue faience tiles (after C.M. Firth and J.E.Quibell).

Top right: Fragment of a faience tile uncovered on site.

Bottom right: Fragment of a limestone block with carved socket for faience tiles uncovered on site. 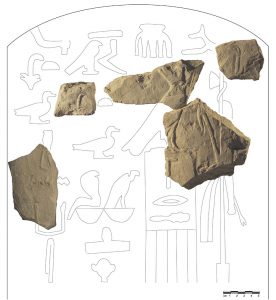 Fragments of a ‘boundary stela’ of Netjerykhet; such stelae probably delimited the area of the funerary complex of Netjerykhet during an early stage of construction.