Corridor 1 is hewn in the eastern bank of the Dry Moat; it runs 22 m eastwards (towards the Step Pyramid) and ends in a rectangular chamber situated on its northern side. The floor of the corridor was paved with irregular slabs of stone. The chamber contained an unusual deposit consisting of animal bones, including species such as giant catfish, pigs, donkey and hartebeest. A large harpoon in a cylindrical box was found below the deposit. The harpoon, measuring 2.60 m in length, is carved of a single piece of juniper wood and is decorated with two finely sculpted figures of undulating snakes. The artifact is currently exhibited in the Imhotep Museum at Saqqara. It would seem that Corridor 1 was originally designed as part of the Dry Moat and the Netjerykhet’s funerary complex. 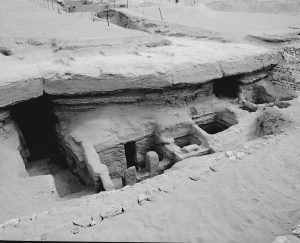 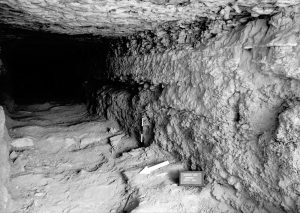 Heavily eroded walls and remains of the pavement in Corridor 1. 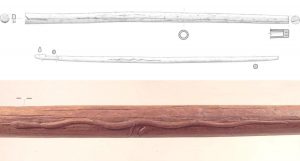 The harpoon found in Corridor 1. The middle section of its shaft is decorated with images of undulating serpents.